On the final day of this anniversary week for the Republic, which culminated with a Republic history-making first – our first livestream launch for the series (see video above) – Republic Creator/Director, Sally McLean, muses on the journey so far …

When I first had the idea for Shakespeare Republic, many moons ago just after I finished working for the BBC in London in the late 1990’s, little did I know what it would grow to become – once I found the courage and means to make it a reality.

Fast forward to five years ago, after a round of phone calls to a few of my favourite actors in Melbourne, and the idea became real with the launch of our first ever video – “Behind The Scenes: What Is Shakespeare Republic?” – released to the world on April 23, 2015 just before we began rehearsals with the newly formed ensemble and began releasing episodes a few short months later.

Since that day – when it was just me producing, editing, production managing & designing the series, as well as adapting (with input from the cast) the pieces for the 21st Century, while also directing and being part of the acting ensemble on screen, with no clear plan for what I’d do with it other than just put it on YouTube – it is hard to believe how far we’ve come.

We now have two seasons of the series, which amounts to 19 episodes and over 2 hours of content. I have two co-Producers – Billy Smedley, who joined the team officially mid-way though the first season, and Christopher Kirby, who came to the table after Season Two – who now both also produce this and other projects with me in my production business, Incognita Enterprises.

We have an established production team, with all departments either being nominated or winning awards for their work in the series. We have expanded the universe to include the commissioned and award-winning Shakespeare short film Speaking Daggers (2017) (still pinching myself that the film got given the tick of approval from the Shakespeare Birthplace Trust and Kenneth Branagh!) and now the Shakespeare mini web-series Dark Arcadia, which just got it’s first round of government funding for production (more on that next blog post).

We found a home with the fabulous Australian streaming platform, Ozflix, listed among Aussie classics such as Mad Max, The Man From Snowy River, Kenny and more, where the first two seasons can be viewed from anywhere around the world. And we were warmly embraced by the international film festival and webfest circuits, which resulted in over 80 official selections, over 70 nominations and over 30 awards for the series from festivals and industry award panels from the UK to USA, New Zealand to Europe, Canada to South Korea and everywhere in-between.

A definite highlight was receiving the prestigious CINE Award for Best Digital Series in the USA in 2017. That win, by proxy, put me on the same list alongside other CINE Alumni such as Steven Spielberg (the then CINE President), Oprah Winfrey, Ron Howard, Mel Brooks, Jim Henson, Mike Nichols, Robert Altman, Spike Lee, Billy Crystal, Robert De Niro, Martin Scorsese, Sydney Pollack and Forest Whitaker. To put it politely – what the hell?!

Standing in a theatre foyer in New York in November 2017 as a result of that win, among fellow creators and showrunners of winning projects such as Variety & PBS’s Actors On Actors, the Emmy and Golden Globe award-winning Mr Robot starring Christian Slater, NBC’s Campus Undercovered, Discovery Channel’s Sonic Sea and the fabulous multi-platform series We The Voters from the Academy Award® nominated Vulcan Productions was truly surreal. Holding my rather heavy, gold-plated, absolutely stunning CINE Award with my name engraved on it later that night alongside Republic team members Billy Smedley and Phoebe Anne Taylor – even more so.

All that attention led to the series being mentioned a couple of times in the Arden Shakespeare series, listed by the British Universities Film & Video Council as a Shakespeare resource and having our first two seasons requested for acquisition to be archived as part of the official collection at the National Film & Sound Archive of Australia as part of their remit to “collect and preserve significant Australian audiovisual productions” and subsequently named as an “Acquisition Highlight” in their 2018/2019 Annual Report.

It also led to being the subject of a plenary panel at the The 14th Biennial Conference of the Australian and New Zealand Shakespeare Association discussing my methodology behind the work, which, in turn, led to my being approached to submit an abstract to write a chapter for a new academic study in Shakespeare adaptations. That abstract submission resulted in my being published academically for the first time in my life in the upcoming Playfulness In Shakespearean Adaptations with a twenty page chapter about my process and philosophy behind Shakespeare Republic, to be published by Routledge in the UK later this year.

And that’s just the tip of the iceberg. I shot my first music video (a Shakespeare song for Speaking Daggers – see above), which I never thought I’d be doing! Getting a beautiful, unsolicited, totally unexpected review in The Guardian. Being asked to run workshops at high schools and universities about Shakespeare. Being given the position of the Shakespeare teacher at the Howard Fine Acting Studio Australia. The actors I’ve had the absolute pleasure of meeting and working with due to this series whom have become friends as well as colleagues. My fellow content creators and showrunners that I have been able to connect with around the world and who form a tight-knit support group that I cherish and admire … there are so many bonuses to my feeling the fear and doing it anyway and I am so, so incredibly grateful for all of it.

This laundry list of success might seem like a humble brag. It’s not. I am very proud of this work – and I can speak about it’s success in this way, because while I might have come up with the initial concept and be the one guiding it – it is a team effort. A team of over 30 people now. And I don’t call them “family” lightly – they are like kin to me. They have proven my trust is not misplaced in giving them some responsibility for my baby and they all contribute to this series’ extraordinary success in so many ways. And even if I could, I wouldn’t want to do this without them.

Shakespeare Republic is still a passion project. And still “The Experiment” (see an earlier blog post from 2017 to find out more about why I give this work that particular name). And it might be because I’ve only had three hours sleep in the past twenty four, but I am quite teary with gratitude just thinking about all this. It is not often that I stop to reflect and I have to say, this has hit me in all the feels!

But, the point of this post is not to rest on past laurels, but rather to celebrate the team’s previous work and officially announce the next chapter. As of this morning, we have officially launched to the world our special stand-alone season of the series: Shakespeare Republic: #AllTheWebsAStage (the Lockdown Edition) via livestream with actors based in both Melbourne and Los Angeles, including some of my favourite people: Christopher Kirby, Phoebe Anne Taylor, Laura Gardner, Frank Collison, Mark Dickinson and Miguel Perez. Some of these people I have known since my 20’s (Mark, I still have that photo of us at a show after party somewhere!), others I have only known since they were cast about a fortnight ago – all of them are fabulous actors and people and I am so excited to be working with them on this new season.

They are the first round of actors to come into the Republic family in this new chapter (or return, in Chris and Phoebe’s case). We have another round of actors for the next block (announced in the above video) and will likely have up to five blocks of actors doing this work in total.

It’s a huge undertaking and I’m feeling a little overwhelmed thinking about the scale of it and am trying to not feel the pressure of living up to past success. So, I’m going to do what I did that first time back in 2015 – bring my vision back to the here and now, work with what’s in front of me and take it one step at a time with no expectations and focused firmly on fun.

How will this new season turn out? I have no idea! I know as Director what I want to achieve with each piece and each actor, but for the series as a whole? I’m very happy to go on that journey and find out at the end. Luckily with this format, each piece is relatively stand-alone, so the mosaic that it forms is always surprising and, for me, usually satisfying once the full season is complete (if my work over the past five years in this format is anything to go by).

So, I invite you now to come with us as we grab our phones and cameras, find some good sources of natural light and a quiet space and each perform Shakespeare in splendid (or not) isolation.

And if you’d like to support the work, why not check out our Patreon page? For as little as $2 a month, you can support the work and help us get some cash in the kitty to give this new crop of actors some money for their work. Which right now, is sorely needed.

Thank you in advance for your support. I look forward to stepping into this brave new world of content creation in lockdown with you alongside us (virtually speaking).

Now, give me that horizon (to quote Captain Jack Sparrow, just for something different).

Till next time … speak anon, 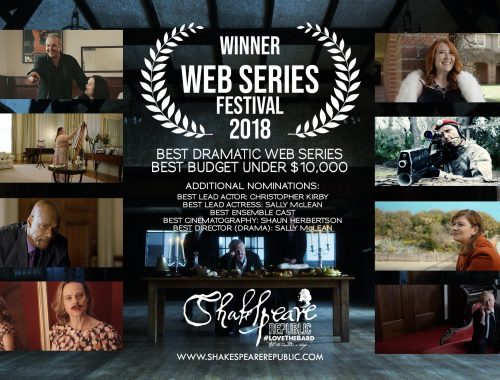 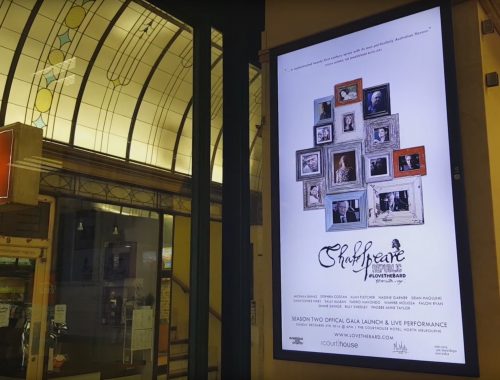