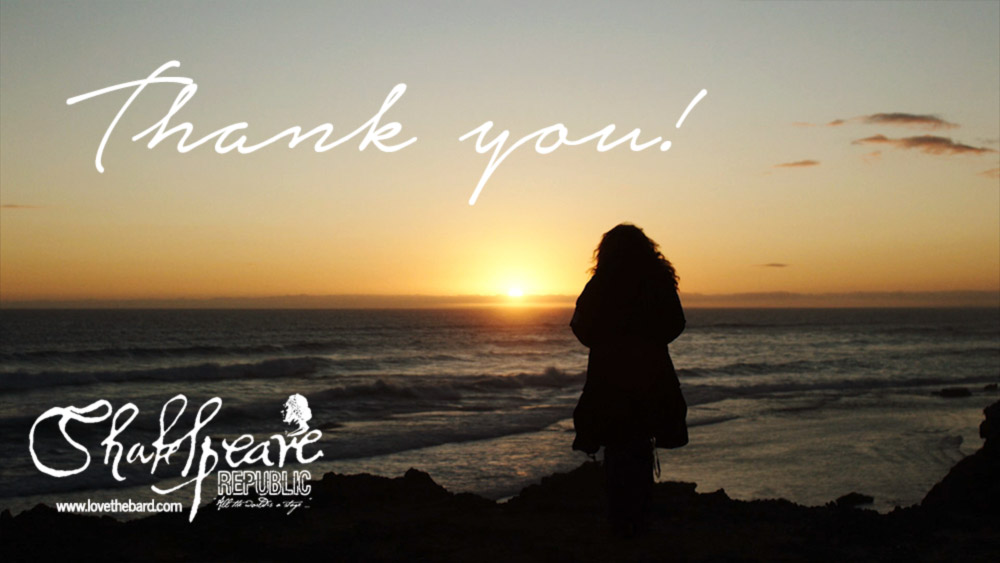 Above: Still from Sally McLean’s episode as “Billie” (Sonnet #18) in Season One (Photo by Shaun Herbertson)

As independents, we are ironically dependent on the generosity of others.  But that’s not a bad thing, because by reaching out like this for help and support, we find our community.  And community is everything in the world of independent filmmaking.  You guys are the ones who watch our work, like our social media shares, comment on our videos and let us know that out there, somewhere, we have an audience.  You engage, debate, contribute and give feedback.  And we couldn’t be more grateful for that engagement and interest in what we’re creating.

SHAKESPEARE REPUBLIC SEASON TWO WOULD NOT BE POSSIBLE WITHOUT THE VALUED SUPPORT AND SPONSORSHIP OF THE FOLLOWING ORGANIZATIONS:

A massive THANK YOU to the following people who donated to our crowdfunding campaign via the Australian Cultural Fund to help make possible the creation of pitch materials for Season Three of Shakespeare Republic – #GodsAndMonsters, as well as our new web series, ‘Till The Boys Come Home – and generously funded us to 146% of our total!  We are so grateful to all of you for your continued support and belief in the work and are hugely thankful to have you as part of the Republic family:

We would like to say a huge THANK YOU to the following people who backed our crowdfunding campaign on IndieGogo in August/September 2016, who made the filming of Season Two possible.  We are so thankful for your support and belief in the work and are hugely grateful for your contributions:

We’d like to say a heartfelt “Thank You”to the following people who supported our fundraising campaign via the Australian Cultural Fund in May 2016, who enabled our campaign to be successfully funded at 123% – we couldn’t have got Season Two filmed and now be in pre-production for our live show element without your help – and we are extremely grateful for your support.