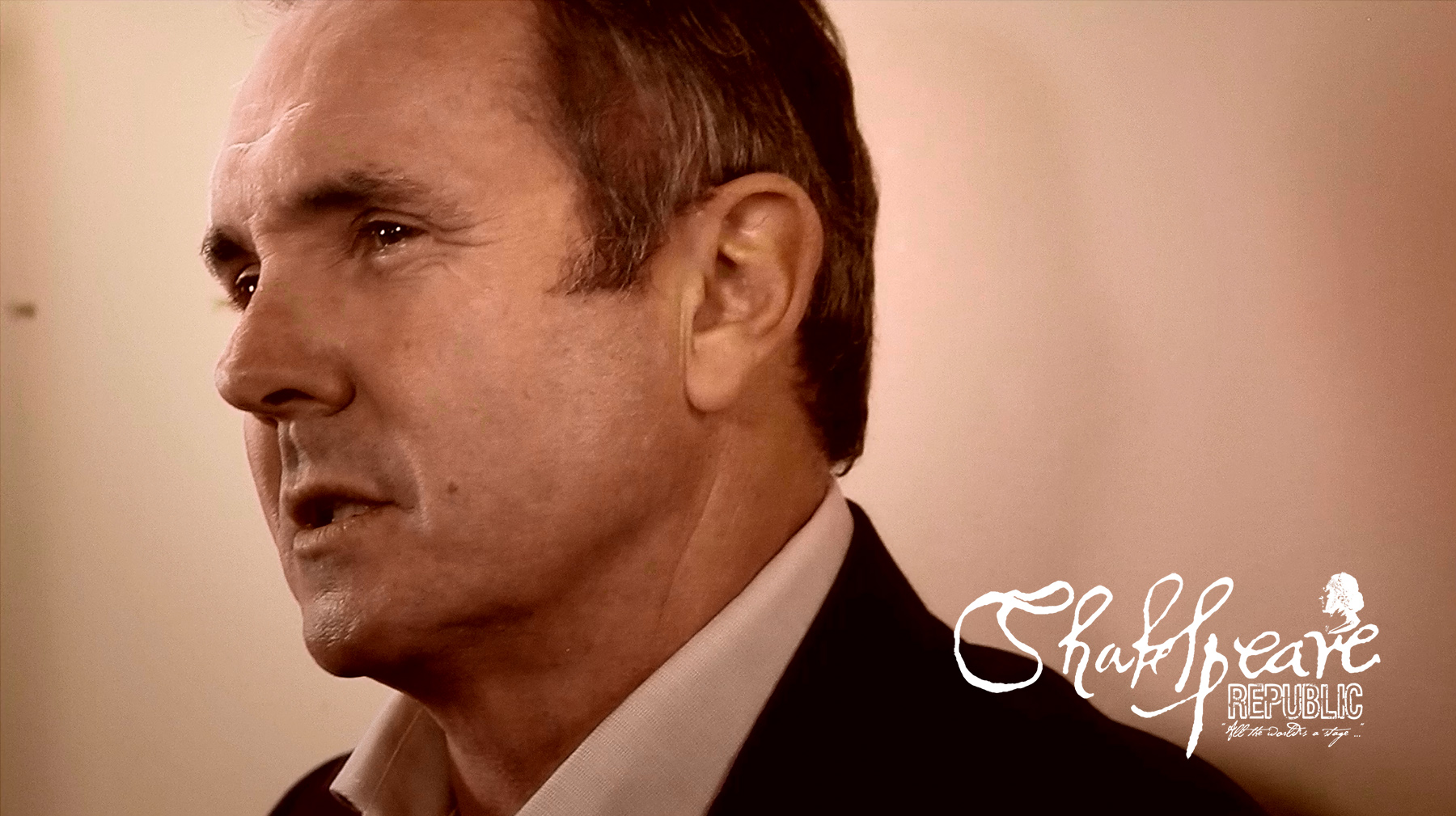 Alan Fletcher as Macbeth from his episode of Shakespeare Republic (Photo: James Dene)

If it were done….

I have always been drawn to Macbeth because it chronicles themes I find so relevant to today’s political and ethical paradigm.

Macbeth is a man convinced by forces outside of himself that greatness is his destiny. His wife goads and reinforces these visions of grandeur encouraging Macbeth to relentlessly pursue this destiny. Most importantly, he can not be convinced by any external force to act until he has reconciled the internal struggle between his ego and his conscience.

So, in this monologue we listen to M ruminate upon this struggle. If he acts quickly and decisively by killing King Duncan tonight then his destiny may be assured. However, he knows that  to do so is intrinsically unjustifiable by all standards of fealty and honour.

We have taken this monologue and its moral dilemmas and placed them in the context of a contemporary politician weighing up the rights and wrongs of staging a coup against his party’s leader.

This dilemma has become a central theme of Australian politics over the last ten to fifteen years. We would like to believe that we have not distorted or manipulated this monologue for the sake of finding a modern context. Rather we believe that it is indicative of the Bard’s brilliance that a play created in the 17th Century speaks truly and profoundly to this modern context.

In my mind I can precis the text into an internal dialogue that might run like this.

“I should move to challenge my leader now rather than wait for him to fall on his own sword later because the political timing is perfect. BUT I owe him loyalty. Not just because he is my leader but also because his patronage has elevated me to high office. He has placed a faith and trust in me that morally demands my fealty. Further, he has performed the role of leader so eloquently that, if I proceed with a challenge against him, some of my colleagues and, certainly, the media will turn on me with a fury that I may not be able to withstand.”

There is no resolution to this internal debate because hovering in the background lies Lady M , the Chief Whip, waiting to goad his ego sufficiently to whip him into action. (Forgive the pun!)

We hope you enjoy the monologue and invite your constructive criticism and analysis.

“I have no spur to prick the sides of my intent, only vaulting ambition …”

The one thing all directors prize is an intelligent, collaborative, engaged actor.  Alan is just that and more.  From the minute I made the phone call to him to ask him to come on board to now, he has been engaged, supportive, enthused and completely collaborative, and I couldn’t be more thrilled or grateful to him for it.

I approached Alan for a myriad of reasons – we’ve known each other long before he was playing the now iconic “Dr Karl”, he’s been a friend for many years, he’s an awesome human being – but mainly because I know he is an actor who has played and loves Shakespeare.  Stints at Perth and Melbourne Theatre Companies playing Shakespeare roles, plus years of other theatre work meant that I knew we were on the same page, so to speak, when it came to The Bard.

When Alan said he wanted to play Macbeth – I was delighted.  He’s perfect for it and I knew he’d do a fascinating portrayal of the infamous Scot.  Many discussions about locations, approach and more ensued and Alan was instrumental in many aspects of his episode – from the concept of the episode and creative aspects of the narrative to location scouting (hilarious day at the Neighbours studios checking out all the male toilets on site – I wish we’d filmed it!) to general logistics ideas and assistance to buying the crew coffee on the day.  He did his homework as an actor, delving down into text – one of my favourite aspects of working with him like this were the conversations around what Shakespeare was saying and how to interpret that for a modern audience.  And this man can act.  As I hope everyone already knew, but can definitely see in this piece.

Alan is also prepared to play.  On set, I threw several things at him unexpectedly and he jumped in and had a go.  Several of those moments are in the final cut.  He was a joy.

Why did we set it the way we did?  Alan has said most of it for me in his piece above.  In Shakespeare’s play, Macbeth is a political creature and politics is his undoing.  You live by the sword, you will die by the sword.  And in Shakespeare’s plays, quite often literally.  And in Australia, a leadership crisis within the party that is in Government is just seen as par for the course now – no leader is safe for long, regardless of political stripe, if they are seen to be damaging the party or the country by their brethren. 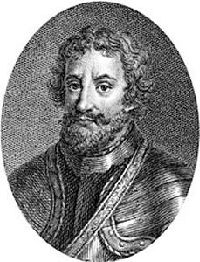 But I am also a proud Scot by ancestry and I have always found it rather unfair that the real Macbeth who actually lived in the 11th Century is known only by Shakespeare’s work.  Because the real Macbeth was nothing like Shakespeare’s version. Mac Bethad mac Findláich (“Macbeth” in English, also known as “The Red King”) did kill Duncan, but it was on the battlefield and he had the full support of the other thanes, because Duncan was considered a terrible king (mainly due to several ill-thought and rash forays into neighbouring territories in what were essentially land-grabs that always went very much pear-shaped.  As Duncan’s last such venture proved when he invaded Macbeth’s lands).  Once Macbeth ascended the throne, Scotland thrived and he became known as “Mac Bethad the renowned” and “the generous king of Fortriu” and was seen as a great king who did a lot of good.  But, Duncan’s sons were having none of that, and Macbeth was indeed killed by Malcolm, as depicted in the play, also in battle, 17 years after he took the crown.

Many have theorized why Shakespeare changed the real story so much in his play.  Some have suggested that King James I of England and VI of Scotland (in power at the time) was descended from Duncan and Malcolm, and so Shakespeare took the path less treacherous and flipped the personalities of his lead characters.  And that is likely true.  You couldn’t write plays if you were without your head, and Kings still had the right to do that to a person if they thought they were being traitorous in any way.  A play suggesting that King James was descended from a tyrant would not be a smart political move.

But I also think that Shakespeare’s version definitely has more drama, intrigue and a stronger depiction of human nature and what can happen in a perfect storm of conditions.  But what makes the character interesting for me is the idea that Macbeth is essentially a good man.  A good, flawed, ambitious man.  So part of my approach as director was to find where the actual Macbeth could live within this – where was the foundation of the good king that Shakespeare never lets us see reach it’s full potential?  This speech is one of the places where we can see it.  Caught up by ambition ignited by those around him, he is ready to pull the trigger, so to speak, on Duncan, but then his conscience pricks him and he pauses.  And thinks about the consequences and what is right and what is wrong.

This is a great study in human nature and I think makes us all ask the question “What would I do in that situation?”.  Faced by a king that he feels is potentially doing the wrong thing for the country – yet knowing that this same king is essentially very good at PR and seems to have the support of the majority of the court, what would you do?  Risk public backlash for fixing what you feel is the issue – by removing your leader?  Or just keep walking with the rest of the pack and let what you see as bad leadership continue – potentially letting him lead you off the cliff?  And is this perception real or justification for darker desires for power yourself?  While Duncan isn’t necessarily shown to be a bad leader in the play, he could be, or at least be seen to be in Macbeth’s mind.  It goes a long way to explaining how Macbeth goes from a loved, respected and liked member of court who is happy with his lot – to murdering his king.

Yes, his wife has a huge impact and the not so subtle overtones of supernatural influence are clearly there as well.  But they also serve to say “these people could be good, but one is too ambitious and the other is playing with forces beyond her control to support that ambition.  They will be seduced into doing things they know aren’t right.” Spoiler – Things Don’t End Well as a result.

Essentially Macbeth is a morality play – but a many layered one.  Things are not black and white in their world – it’s all shades of grey (in the traditional sense of that phrase).

As a director I was aiming to delve into those layers and tease out some of this stuff, from both history and Shakespeare’s text, while also giving Alan enough space to discover and express the complicated nature of his world as Macbeth from his own investigation into character, using my suggestions as signposts as needed.  Which he willingly did and I couldn’t be prouder of our work together.

I like to think my ancestors would be happy too.